PADDLE AROUND PORTLAND
If skimming the water in a kayak, canoe or dragon boat is your destiny, there are several areas to single or double paddle around in Portland. Here’s a rundown of local options for great waterway wandering. 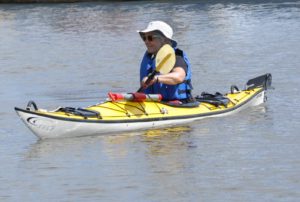 Places to Kayak and Canoe
Look closely off the Hawthorne Bridge downtown, and you’ll spot kayakers year-round on the Willamette River, around Ross Island, the South Waterfront, and near Willamette Park. Braver souls venture into the Columbia River in north Portland, not so intimidated by sharing the river with large cargo ships. The Columbia River Upper and Lower Sloughs offer more scenic above-water trips, with some natural obstacles and tides to deal with. Visit Canoeing & Kayaking for more on the Columbia River.

To the northwest of Portland the more serene Scappoose Bay channel, which feeds into the Columbia River, lets you get closer to nature and wildlife. The Clackamas River, southeast of Portland is considered one of the best rapid-water places in the state to kayak, but beginners are warned to not take it on without a guide.

If you want a family-friendly paddling place, try the Tualatin River.

Dragon Boating
Enthusiasts tell us that once you’ve tried it, there’s no turning back. 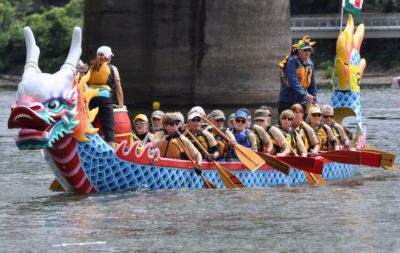 In Portland, over-55 paddlers can join their own dragon boat club – Golden Dragons – for fun and fitness. They openly claim that old age and treachery will overcome youth and ambition. (You’ll have to see for yourself, of course.) Senior dragons complete against other dragon boats in Portland as well as in San Francisco and Victoria, B.C.

There are several ways to get into the long and skinny centipede-like boats skimming the Willamette River and Vancouver Lake for racing or just having fun. The sport even has its own festival – Portland Dragon Boat Festival – in September. Or join a team in the Portland Rose Festival Dragon Boat Race which is held in June. Dragon boats are open to all ages and all abilities.

How to Get Started
You can get involved in paddling either on your own or in a group. Classes for all ages and abilities are conducted by area outfitters, city parks and recreation departments, community colleges and other organizations. You also can check out a number of area kayaking, canoeing and paddling clubs which provide lessons and sponsor events.

See the Kayak, Canoe and Paddle Around Portland list of resources.

Take a Hike, PDX — A free one-stop mini-guide to walking and hiking ideas, clubs and resources in and around Portland, Oregon.